Sandy Beaches and Pre-Inca Culture: The Coastal Route from Lima to Ecuador

Many travelers start their adventure in Latin America with Peru and the classic South Route. It makes sense — the highlights Cusco, Machu Picchu, Lake Titicaca, and more await them here. Long-term travelers in particular, however, are soon drawn into the still relatively untouristic north, Peru’s true treasure trove! The adventurers are greeted by numerous ruins and temples, surfer villages, and, of course, freshly caught fish — perfect for the national dish Ceviche. You’ll find various ways to include the coastline in your itinerary in our personalized guidebook ALL ACROSS PERU. It also includes detailed city guides with plenty of info on lodging, restaurants, and other tips.

Planning Your Trip across Peru? Our guide is the perfect travel companion, full of inspiration and ready to help you plan your Peru trip from A to Z. Be inspired by our route recommendations and insider tips from Peruvian locals. Begin your journey in one of the most fascinating countries in Latin America!

There are many reasons for the north coast: To enjoy a beach holiday on the fine sandy beaches, to trace the coastal cultures (such as Moche or Chimú), to feed the need for curiosity and discovery, or to travel from there to Ecuador. In this post, we’ll tell you how to travel from Lima to the north of Peru and from there to Ecuador — and about the adventures on the way!

On the northern coastal route you will experience:

From Lima to Ecuador: Bus or Plane?

There are some airports in northern Peru, e.g. in Chimbote, Trujillo, Chiclayo, Piura or Talara. The airlines LATAM, LC Perú or Iberia fly to some of these airports. You can find out which airlines fly where via Skyscanner or Kayak.

In our humble opinion, however, there’s no need to travel to the north by plane.

The bus route to the north follows the Panamericana. It’s not very windy and there’s hardly any difference in altitude. This makes the journey pretty comfortable and quick, especially when you’re traveling overnight in one of the super-luxury buses. The amount of money you save on the bus is huge. You can find seats for 120 S. / (About 35 €) in the Semi-Cama bus from Lima to Tumbes in the very north (about 20 hours travel time). In comparison, a flight costs around 180 € (one-way with LATAM), almost 4 times as much!

Go by bus and you’ll also have the opportunity to get to know the north coast of Peru better, visit old pre-Inca temples, learn to surf, or eat a delicious ceviche.

Here are the stations on the northern coastal route from Lima to Ecuador and their highlights:

Travel time from Lima: About 7 hours

From Lima, you drive north on the Panamericana. You have the opportunity to stop off in the fishing town of Chimbote, but it’s not really worth it because there isn’t much to see. We recommend to go directly from Lima to Trujillo. You’ll reach the colonial city in 8 hours and should plan a few days to look around. Trujillo can be loud and hectic like a small-sized Lima, which is why you might want to spend the night in the small surf village Huanchaco. Taxis will take you and your luggage from the bus station to Huanchaco for about 20 S./.

Huanchaco is a small, idyllic fishing village that will greet you with the famous „Caballitos de Totora“, traditional reed boats that have been in use for millennia. Nowadays, you’ll meet more surfers than fishermen — an ideal opportunity for a surf lesson with one of the many surf schools on the beach promenade. Huanchaco has plenty of backpacker accommodations, as well as mid-range hotels and upscale hotels.

From Huanchaco, you have the opportunity to explore numerous locations and archaeological sites.

Visit the largest pre-Inca city in the world: Chan Chan! In fact, if you’re travelling from Huanchaco to Trujillo or back, you’ll be driving right through it: The huge old city complex is made of sand and covers 26 square kilometers along the coast. Only a few corners serve as a reminder of the once mighty mudbrick city. The weather phenomenon El Niño has caused such heavy rains that not much of the former empire of the Chimú culture is recognizable. However, some parts are still well preserved and open to visitors. You can admire ancient walls with their reliefs here: The Chimú were a very nature-loving people, so you’ll see representations of waves, fish, sea lions, and birds in the walls of the city. The Museo del Sitio Chan Chan is also worth seeing.

The Moche culture with its sun and moon temples

Of the two huacas, the temples located about 10 kilometers from Trujillo, only the Huaca de la Luna is open to the public, but it’s worth it! You’ll find very well preserved temples and impressive paintings on several levels. A must-see when in Trujillo.

Huaca del Brujo, a fairly new archaeological site about 60 km from Trujillo, is an absolutely fantastic day trip. Excavations are still going on there, but parts of it can already be visited. The drive there is already an adventure: Take a Colectivo from Trujillo to Chocope and on to Magdalena del Cao. From there you have to take a mototaxi to get to the archaeological site — but that’s worth it, the atmosphere is really mystical there and the ruins are in excellent shape!

If you’ve always wanted to learn how to surf, then you’ve come to the right place in Huanchaco. Surf schools line the beach promenade and you can easily and quickly learn how to catch the perfect wave here. Beginners can start riding in the quieter bay to the right of the pier, the pros take on the wilder waves to the left of it.

Stop 2: From Trujillo via Puerto Chicama and Pacasmayo to Chiclayo

Travel time from Trujillo to Chiclayo: About 3 hours

Anyone who caught the surf bug in Huanchaco should definitely go on a trip to Chicama, the longest wave in the world! Either go with a surf school from Huanchaco, or take the Interurbano to Paiján and then the Colectivo to Puerto Chicama.

If Huanchaco and Trujillo are too busy for you, you’ll find peace in Pacasmayo because tourism has hardly touched it. There’s a lot of old colonial houses with a romantic  run-down look here. The best way to get to Pacasmayo is to take the Interurbano from Trujillo.

You can also skip the two villages and drive straight to Chiclayo, of course. Chiclayo lies about 20 km inland and is known for its shamans, witches, and wizards. Many largely unknown archaeological sites are in the immediate vicinity.

A visit to the „Señor de Sipán“

You can admire valuable excavation pieces such as precious pieces of jewelry (ear pegs with turquoise inlays, nose decorations, crowns) as well as clothing, flags, and ceramics in the still relatively new museum of the royal tombs of Sipán. An absolute must for those who drive to Chiclayo!

The Witches Market of Chiclayo

There are all sorts of curiosities to be found on the fascinating witches market. Herbs, powders, and remedies are sold here by the so-called curanderos, the shamans. You shouldn’t miss this market because where else do you have the opportunity to meet real shamans and stock up on all kinds of remedies?

The ruins of Túcume are the largest collection of pre-Columbian pyramids. Here, too, some are still being excavated and only a few temples are accessible at all. Nevertheless, a visit is worthwhile.

The ruins of Túcume outside Chiclayo

Sunbathers on the beach Pimentel

Want to spend a few days at the beach and sizzle in the sun? Then you’re in exactly the right place in Pimentel. A little tip: If you are looking for beautiful beaches, save up some beach days and head further north, because the farther north you drive, the finer the sand and the warmer the water.

Stop 3: From Chiclayo to Máncora and the Nearby Beaches

Travel time from Chiclayo to Máncora: About 5-6 hours

Travelers often ask us about Máncora because it’s THE beach resort in Peru. The hype around Máncora is difficult to understand because, although the beach is more tropical than in Huanchaco, the Panamericana runs straight through the place, which makes it a bit uncomfortable. Nevertheless, we find that it’s a worthwhile stop on the way to Ecuador. You’ll find time to sunbathe here, eat ceviche, drink cocktails on the beach, and enjoy all the benefits of a beach holiday. You can also kitesurf here, by the way.

Our tip: There’s even nicer beaches in Punta Sal, about 30 minutes drive from Mancora by Colectivo. The sea is calmer here than on the other beaches and therefore perfect for swimming.

Stop 4: From Máncora to Tumbes

Travel time from Máncora to Tumbes: About 2 hours

It’s getting more and more tropical, have you noticed? Tumbes is, so to speak, the last town before the border to Ecuador — and it’s getting greener and greener.

It would be wrong to reduce Tumbes to a dubious and hot border town: Mangroves and nature reserves want to be explored here. Granted, the city itself is not worth seeing, so get out into nature!

The fishing village Zorritos is located about 35 km from Tumbes and is well suited for a day trip, especially to observe the numerous birds.

The easiest way to cross the border is to take the bus from Tumbes to Machala (2 hours) or directly to Guayaquil (6 hours). The bus company Cifa Internacional offers direct connections. At the border, you’ll disembark, get your passports stamped, and hey presto: You’re in Ecuador.

You can find more travel inspirations, excursion destinations, routes, and planning tips for your Peru trip in our individual travel guide ALL ACROSS PERU!

Hola! I’m Anne, Co-founder of ALL ACROSS PERU. In 2011 I travelled to Peru for the first time: I had planned to stay for 6 month that turned out to become 2 years! Since then, I regularly keep coming back to the most beautiful country in the world. 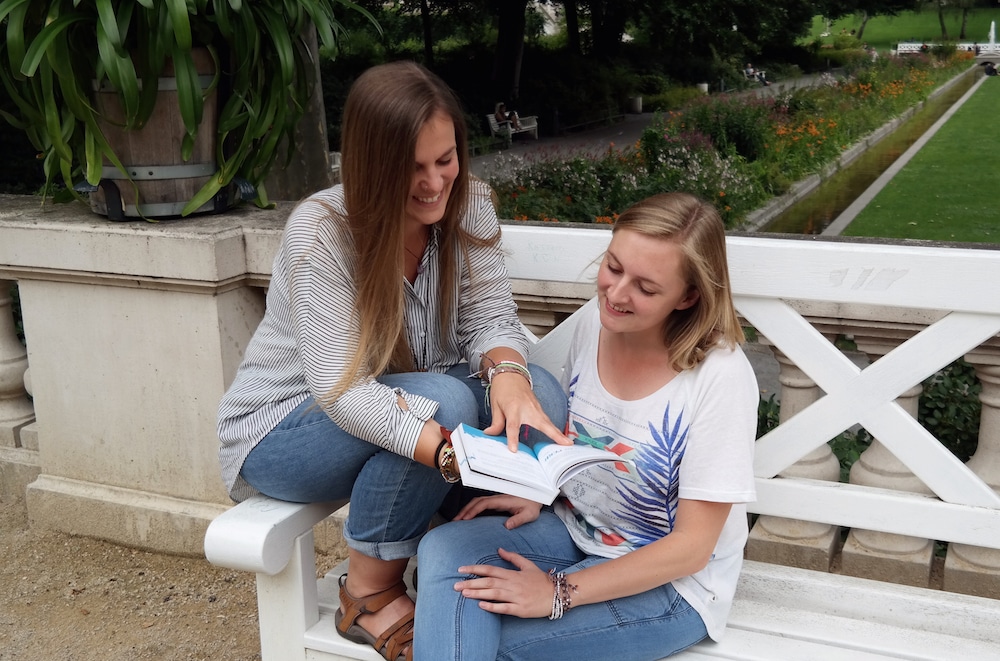 We are Nora & Anne, the authors of the travel guide ALL ACROSS PERU.

How much is a trip to Peru?